This is the deck I am currently using post May 2016 patch, and it just took me to 3200+ trophies. It is made specifically to counter royal giant, sparky and the hog rider combinations. I am not playing much these days, so I decided to create a deck out of cards I know how to play well and turn it into something that counters the current popular arena 8 and arena 7 decks really well.

Turns out this also means it has a lot of common cards, 6 of them to be exact, and if you want you can replace poison with arrows and thus make it 7 common cards! Common cards are great, as they are a lot easy to get to high levels.

A lot changed with the May patch to Clash Royale, not just the new cards, but also the changes made to the cards that were already in play. The most notably of those changes was the increased range of the royal giant. This arena 8 deck counters the royal giant really well, and it crushes sparky and the lava hound. 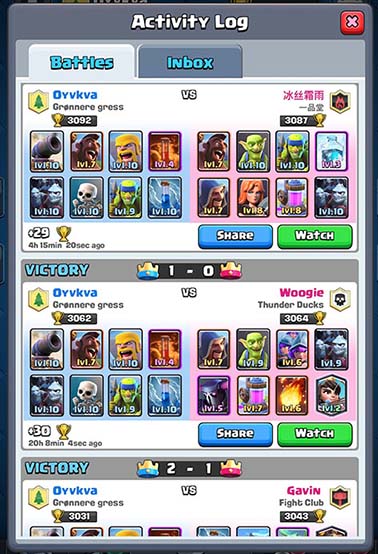 Let’s look at each card.

Hog Rider.
Yeah I know, I have the hog rider in almost every deck. It’s just that I have a lot of success with it, whenever I replace it with something else I do much worse, so why change something that works?

Poison.
I also have poison in a lot of my decks, but this can easily be replaced by fireball or arrows, just use whatever you feel most comfortable with in this spot.

Cannon.
The cannon have been nerfed a lot in recent patches. I still think it is the best in this spot, but tesla is really close. What do you guys think, tesla or cannon here?

Zap.
I got zap level 10 which is one level above my player level which is 9. Due to that zap is really good for me in this spot, but if your zap is the same as your player level or lower, I suggest you use arrows instead.

Spear goblins.
We need something apart from the minion horde to deal with flying units. Spear goblins do a good job here, but archers work really good as well. Use the one you have the highest level of, if they are even, go with spear goblins.

Barbarians.
After I got my barbarians to level 10 I have been using them a lot. Barbarians are really strong at higher levels. If your barbarians are low level I’d use valkyrie instead, she is really powerful after the recent buffs.

Minion horde.
These kill sparky, lava hound or royal giant in no time. I added these to the deck to specifically deal with these new troops. However, they also counter the golem and pekka really well.

Skeletons.
Great at distracting troops and also let us cycle through to the cards we need really fast.

This decks most likely has a lot troops you are already familiar with playing, which helps a lot when trying this deck out for the first time. I selected the different troops in the deck based on what they counter well, the only card that is there for the damage is the hog rider.

The way to be successful with this deck is to start out defensively and react to what your opponent is doing. 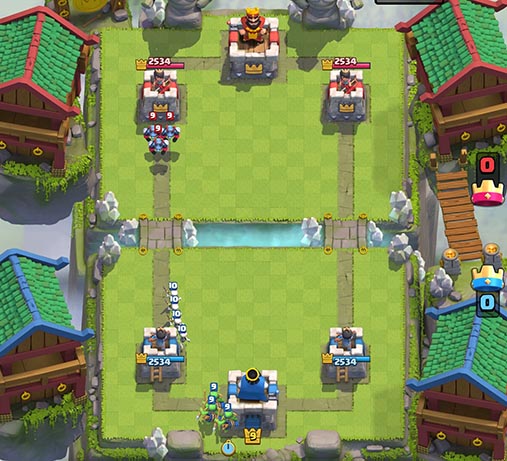 I don’t really like to start with the cannon as I want to be able to place it at the perfect spot for when my opponent is attacking. It is really annoying if you place a cannon and your opponent takes it out with a princess or royal giant from out of your tower’s range.

The only time you should be aggressive from the start is when your opponent puts down an elixir collector or another slow expensive troop far back, then you will attack with all you have as long as you have the hog rider in your hand. 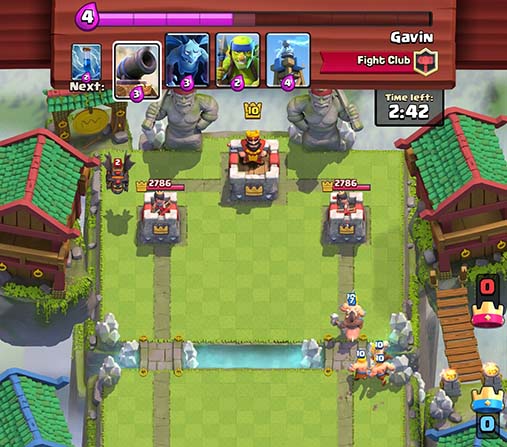 Here you can see my opponent put down a lava hound in the back, and I make a strong attack in the other lane to force him to either defend or loose his tower. I would have done the same if it had been an elixir collector. If it had been a ground troop I would probably have saved my barbarians and backed the hog rider up with some other troops instead.

Defending against the hog rider.

The most common push you will face is still the hog rider push, often followed up with goblins or spear goblins. Here are a few ways to defend it. 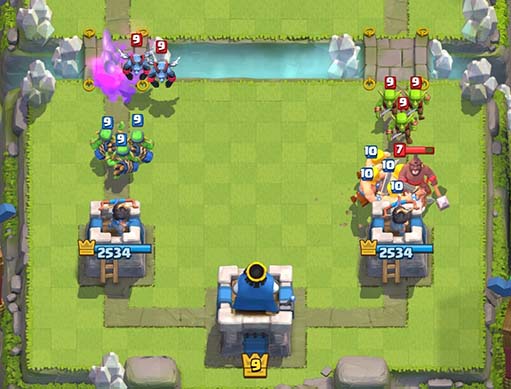 Barbarians by themselves do a fine job stopping the hog rider even if goblins are coming along to back him up. They will tank the damage from the goblins while they kill the hog rider. In most cases the hog rider will only get one hit on your tower. 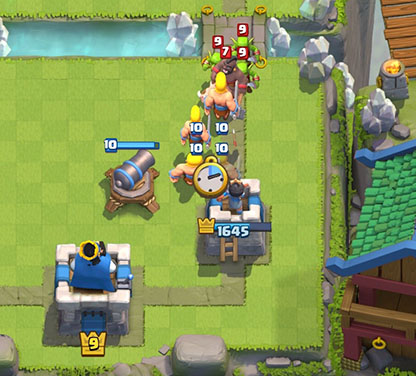 It is even better of course if you use a cannon to take the hit from the hog rider, then you won’t get any damage done to your tower at all, and the cannon will survive also. Another advantage is that the cannon will help with taking out the goblins so that your barbarians make it out of the battle at close to full health. 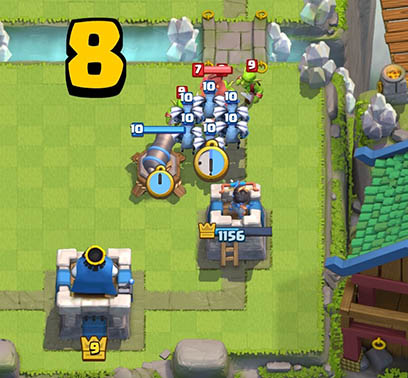 The minion horde can also be used to take out the hog rider. The minion horde does a lot of damage, but you should make sure that your opponent doesn’t have arrows before you do this. The advantage with the minion horde is that they will all survive with full health.

Defending against the “unstoppable” push.

With all the new troops and buffs to older troops there are some pushes now that are really hard to stop. We have sparky, royal giant, musketeers, pekka, goblin and other hard to stop troops. When it comes to sparky and the royale giant specifically, I would refer you to the stop sparky and stop royal giant articles. Those articles show you how to use the troops in this deck to stop those troops.

When it comes to stopping other types of pushes I suggest you use the same strategies. I will also show you one example on how I stopped push with three musketeers and a princess behind a Pekka. 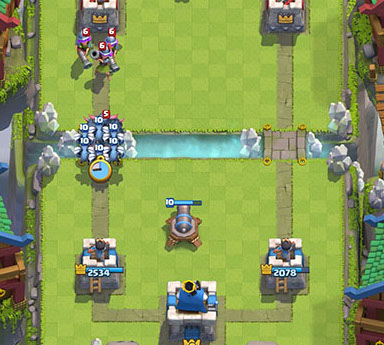 Here I already had my cannon down which was a good thing, and I played my minion horde as soon as the Pekka crossed the bridge. Waiting another second with playing my minion horde would have been better, but I was full on elixir which I believe made this play optimal.

My minion horde took out most of the Pekka’s health so that the cannon and my tower can take it down easily. I then played poison on the three musketeers, but unfortunately the princess was placed just out of range. 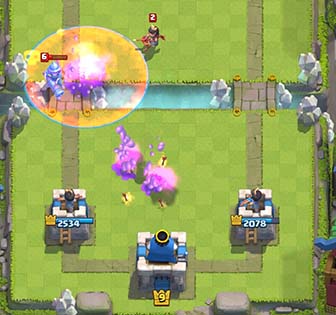 Still the poison together with a zap took out all the musketeers before they were able to deal any damage to my tower. Now it’s only the princess left to deal with. 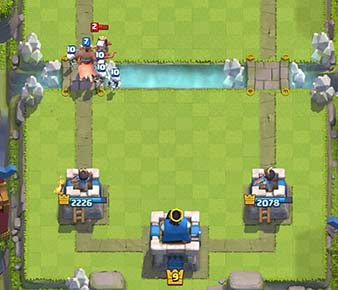 I sent skeletons after the princess once she got locked onto my tower, and then I drop the hog rider to counter-attack.

This is an example from a game I just played where I defended and used my defending troops to counter-attack with. That’s key, you want to use the same troops you defend with to join your attack on your opponent’s tower. 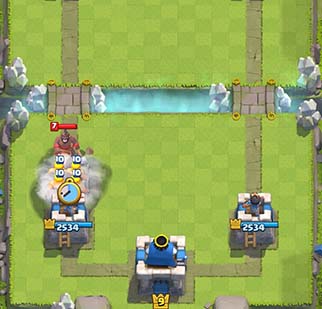 Here I first defend my own tower with barbarians. Barbarians are great at killing enemy hog riders, if you place them really well the hog rider won’t even get one hit in on the tower. 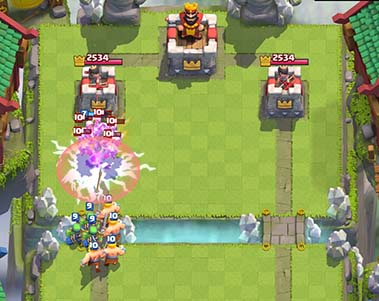 It is a bit hard to see, but here I played a hog rider and spear goblins. They both join my barbarians on the attack. My opponent played a minion horde which I countered with zap. My zap doesn’t kill the minions, but it leaves them so low in health that my spear goblins can 1-shot them. 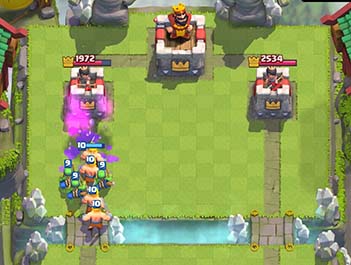 The spear goblins took out the minion horde with ease, and they are now focused on bringing down the enemy tower. 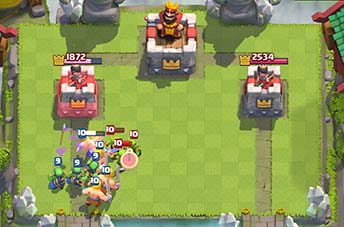 My barbarians do the tanking and are able to take out the goblins my opponent is defending with. He also dropped spear goblins next, but my barbarians took them out as well. 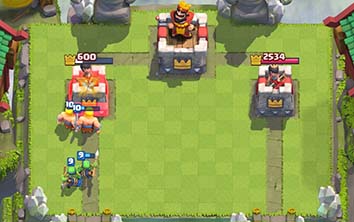 As you can see, my spear goblins have done a lot of damage to the tower and left it low enough so that my two barbarians can easily take it out. 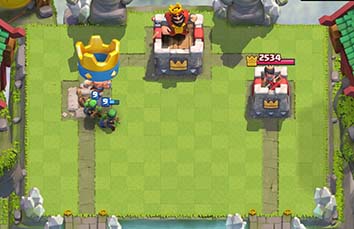 My two spear goblin heroes are still alive while the tower is down. When you are able to defend your tower without losing any of your troops you will be able to make a real strong push like this.

Pushing both lanes at the same time is a strategy I rarely use, but with this deck it is a very good strategy as you have so many good troops to split push with. 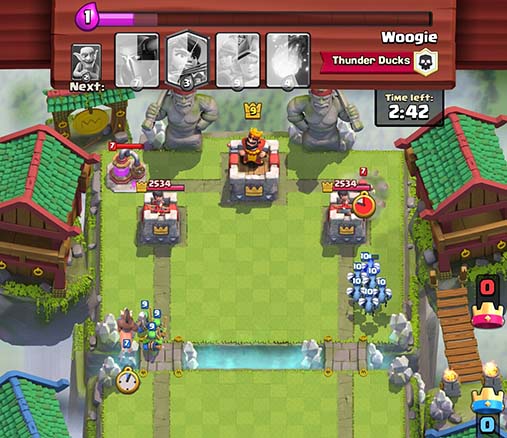 My favourite troops to split push with would be the hog rider in one lane and the minion horde in the other. If you play this right after your opponent drops and elixir collector he has no way to defend it. He has to choose one lane to defend in as you can see here, and you are able to get to the other tower unhindered and deal a ton of damage. 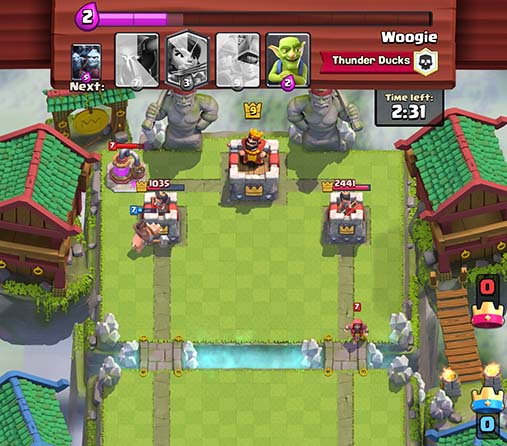 Here you can see that he took out my minion horde with ease for sure, but my hog rider and spear goblins have been dealing damage to his tower at the same time. My hog rider actually got one last hit in here and brought the tower town to 750 hit points. Not a bad way to start the game! 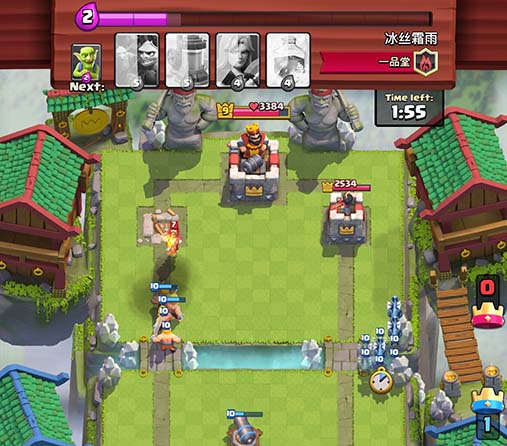 This is another example of pushing, this time with barbarians and the minion horde. The barbarians had just survived defending my tower and were on their way towards my opponent. When he placed his wizard in defence I played my minion horde in the other lane. As you can see from his elixir and cards, he will have a hard time defending against the minion horde.

Summary of the deck.

This deck has a lot of common cards that are easier to get to high levels compared to the other cards. The troops are perfect for countering the current popular decks and the deck is a lot of fun to play. I’m really interested in hearing how this deck works out for those that decide to test it out, so please leave a comment and let me know, thanks!