Goblin Barrel is the best update in the latest patch of July 2016. They reduced the cost of the Goblin Barrel from 4 to 3 elixirs. In the process, they removed the small initial damage of the barrel and reverted back the spawn time from the original. Because of this, many players will enjoy using the Goblin Barrel in all levels of the Arena.

Goblin Barrel is a spell card that throws a barrel with 3 Goblins inside. They can deploy it any place in the map, just like the legendary card, Miner. It can be used as a surprise attack, split pushing or a distraction.

Goblin Barrel plays well with a tank like Giants and Golem. Once the Crown Tower starts attacking the tank, you can deploy the Goblin Barrel in the tower and take down it down fast. 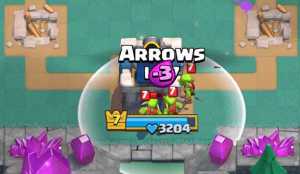 Building a deck with the Goblin Barrel is quite easy. It is a flexible card to begin with and can effortlessly fit in any deck you want. As long as you have cards to defend against your opponent’s combination and strategy, you can experiment and try different deck with your Goblin Barrel.

To help you get an idea of your preferred deck, here are some of the Goblin Barrel Decks that you can use as inspiration. 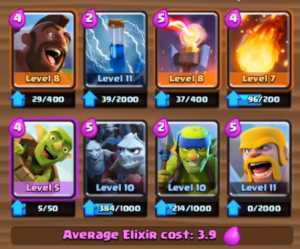 This deck is really fun to play. You have Hog Rider and Barbarians to act as your tank cards. Hog Rider, as we all know, is a strong tanky troop that can tear down Crown Towers easily if not countered well. It can serve as a distraction, too, for Minions and Princess. Barbarians will be your defensive killer against beefy tanks like Golem, Giants and Royal Giant. Because of their high health and good damage, they are flexible for offense and defense. Spear Goblins for distractions and support against flying troops. Your Zap will be used to counter swarm troops, stun your enemy for a small delay for additional damage and can be used to reset an attack especially for Royal Giants. Fireball is a great card to counter swarm of troops that is pushing to your lane. It can be used offensively by destroying Barbarians, Buildings, Witch, Musketeer, and get a better trade if you can target the tower at the same time. Inferno Tower will be your only building in this deck. You can counter tanks and building aggressive troops and can stay strong because of its decent health. 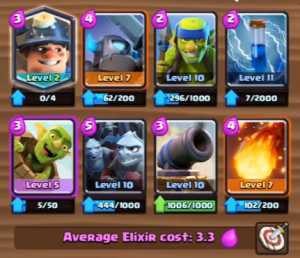 Miner and Goblin Barrel is a ridiculously fun combination. Both of them can get to any place of the map, fast. They can be used to distract opponents or immediately destroy buildings, especially spawner buildings and elixir collector, and towers. Mini Pekka is an offensive card that deals a lot of damage. Once it reaches the enemy tower, it will slice a chunk of hit points with its sword. Spear Goblins, again for distraction and supportive troop. Zap, a handy spell that can be used in many situations. Minion Horde will be your main defensive card against tanks. Cannon will be your sole building against Hog Riders, Royal Giants and other building aggressive troop. And Fireball for offensive and defensive play. 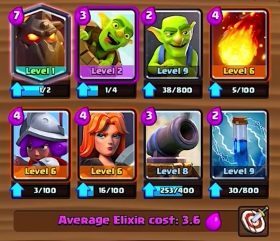 Lava Hound is a strong tank that is hard to counter if your enemy doesn’t have proper cards to use against it. Always watch out for Inferno Tower and Minion Horde as they can easily destroy this card. Goblins can be replaced with Spear Goblins as they both can serve as a distraction and support to your deck. A Musketeer is a ranged offensive card that works well with the Lava Hound. Valkyrie will be your main defensive card especially against swarm troops and can tank well, too. Cannon for Hog Riders and Royal Giants. And spell cards, Zap and Fireball. 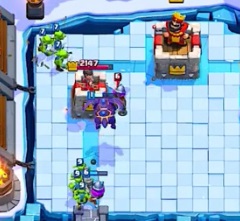 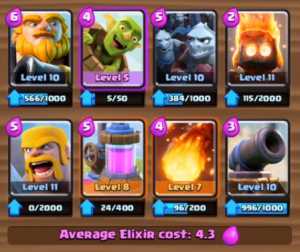 The Royal Giant is one of the most used card in Royal Arena and higher. Because of its long range and high hit points, it can easily destroy Towers while tanking the enemy towers and troops. You can add Goblin Barrel and confuse your opponents which one to take down first, the Royal Giant or Goblin Barrel. Minion Horde and Barbarians will be your defensive troop against pushes. Again, Minion Horde can bait your opponent to use Arrows/Zap spell which will give you the opportunity to place your Goblin Barrel in the opponent’s tower. Fire Spirits is used in combination with the Royal Giant. It can easily kill swarm troops that is the usual counter to Royal Giants.  Cannon will be your only building against Hog Rider and Royal Giant. Fireball will be your supportive spell against pushes and opponent’s buildings.

• A high level Goblin Barrel (Level 5) will have enough hit points to deal much damage against solo Crown Towers. The Goblins will take 3 hits before getting killed by the tower, compared to the usual 2. It ultimately that give the Goblins more time to deal damage to the tower! 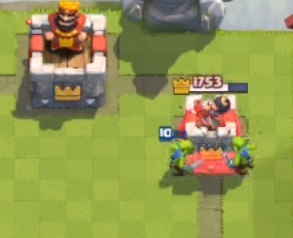 • Use a bit of mind game in deploying your Goblin Barrel. Use it first directly at the Crown Tower so that the three Goblins will be separated in three different directions. Making it hard for troops to swipe it by a single shot compared to deploying it on an area where the three Goblins are near each other. If your opponent has Zap or Arrows, they will use it immediately to defend its tower. So the second you try to place your Goblin Barrel, try to place it near back or the side of the wall to evade the predicted spells. 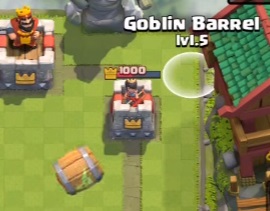