This deck took me from 2200 to 2800 trophies yesterday. It’s really an aggressive deck and a lot of fun to play.

I haven’t posted here in quite a while now as I’ve been traveling and not been able to play Clash Royale much. During this time I’ve played a few games here and there with lots of different decks and ended up dropping down to around 2200 trophies. When you play a new deck all the time your results really suffer, but that’s ok, it’s been fun trying out new decks.

Anyways, yesterday I had several hours to play Clash Royale, and I decided to put together a new deck based on my favorite deck from before. I wanted to make a more aggressive deck and at the same time make a cheap deck so that I can cycle through the deck really fast. After trying lots of different variations with Giant, Balloon and Freeze, I decided to go for the the well known low level card, the Prince.

Turns out the Prince is working really well in this deck and brought me up from 2200 to 2800 trophies with very few losses. 2800 trophies at level 8 is not that unusual, but it shows that this deck really does well in Arena 7. I hope to reach 3000+ with this deck soon.

This deck consists of 2 epics and 1 rare card. The rest of the cards are low level common cards. It is a really cheap deck to play at only 3.0 average elixir cost. This means you are able to keep pressure no your opponent all the time, which is a lot of fun!

Hog Rider.
The Hog Rider is the most important card in my opinion. It is usually the Hog Rider and not the Prince that ends up taking out the enemy towers.

Prince.
Even after the recent nerf, the Prince is still a very good card. The reason why I like the Prince in here is not just because he is good at taking out the enemy towers. The Prince is also very good defensively at rushing over to enemy golems, pekkas, giants and other strong units and taking them out quickly with the help of the crown tower and the cannon.

Spear Goblins.
Spear Goblins are in almost all of my decks. I actually ranked these #3 for all time best cards of Clash Royale. They are cheap and decent at taking out enemy flying units. You really need these together with your Archers to deal with incoming Balloons.

Skeletons.
When I first started playing Clash Royale I looked at the Skeletons as quite a useless card. The skeletons have almost no hit points and die very fast. However, they do deal a lot of damage, and now I see that they are actually great value costing only 1 elixir. They have saved me more than once in difficult situation when I’ve been too low on elixir to play anything else.

Poison.
Poison is just so useful these days, after the buff in the last patch it’s much better than Arrows and Fireball in my opinion. You use this spell both for offence and defence. It depends on what troops your opponent has in his deck. If your opponent has the 3 musketeers you want to use Poison on those, even better when it hits other troops surrounding the musketeers as well. I will also use Zap on the musketeers as well if they start getting close to my tower, it’ll still be a profitable elixir trade.

You can also use poison offensively so stop your opponent from defending with smaller troops. It will also slow down the attack speed of his towers and troops letting you get more hits off.

Zap.
The Zap stun is really nice when you have troops hitting the enemy tower and want to get another hit off. If you have a lot of troops on the enemy tower a one second stun can let you do a lot more damage. Zap also takes out small troops like Goblins and Skeletons, even against Minions it works well either taking them out or bringing them down to “one-shot-hp”. The level of your Zap spell is obviously really important.

Cannon.
Now you don’t face that many X-Bow players anymore, which is great, but you still have the type of players that only know how to kill your tower using the mortar. The cannon is there to stop these guys. If you see they have the Mortar in their deck, you wait till they play it and then place your Cannon right in front of it. The Cannon takes out a Mortar really quickly. In normal games against decent players you use the Cannon to distract troops that would otherwise mess with your tower.

Archers.
With the new update Archers are really strong as they now attack just as quickly as Spear Goblins. I really like having Archers as an opener in this deck as they walk slow so you can regain elixir to drop other troops to join them when they get to the bridge. 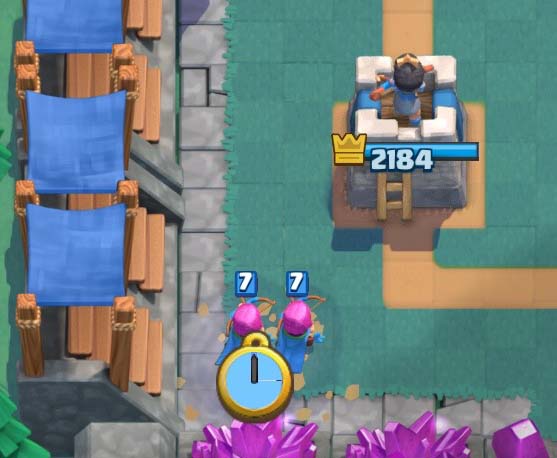 I love to open with Archers when I play this deck. They will walk slowly towards the bridge while your elixir refills. Once they are getting close to the bridge you can see what your opponent has played and take it from there.

Spear Goblin opening also work well. The thing is that these guys run a lot faster so you have to make a quick decision if you want to place a Prince or Hog Rider in front of them before reaching the bridge or not. In most cases when I open with the Spear Goblins I just let them cross the map solo and do some damage to the enemy tower while I make the push later. 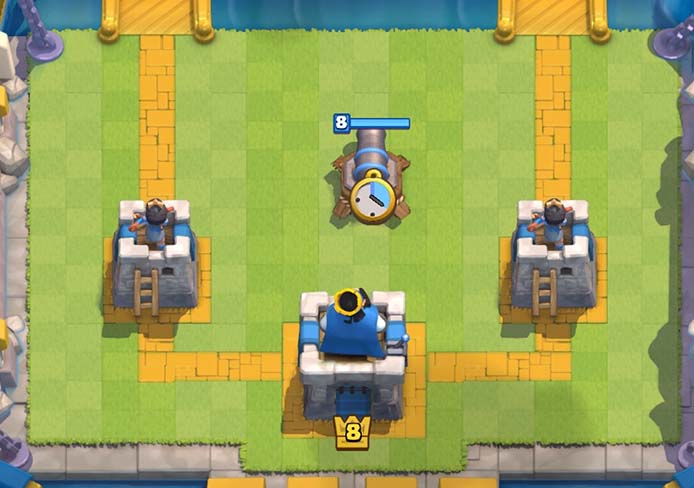 The Cannon is a very conservative opening, but if you don’t have cards in your hand that you can use for an early game push, the Cannon is a good choice. The cards you would want to make an early push is the Hog Rider or Prince and Zap. 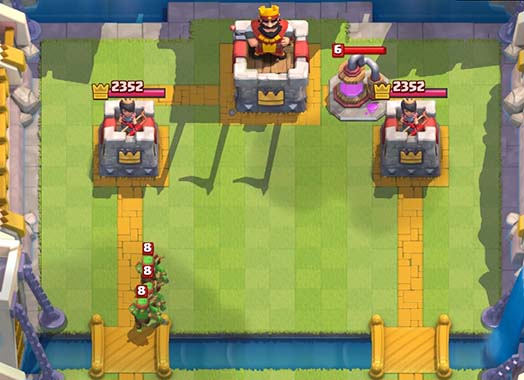 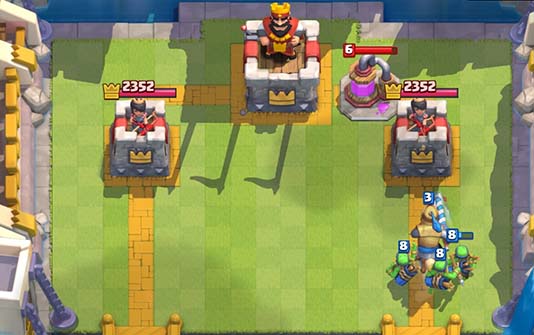 Prince with Spear Goblins in the back works really well. Often you will open with the Spear Goblins and play the Prince in front of them when you see that your opponent puts down the Elixir Collector. I really like to have Zap in my hand as well, but in this case I didn’t. 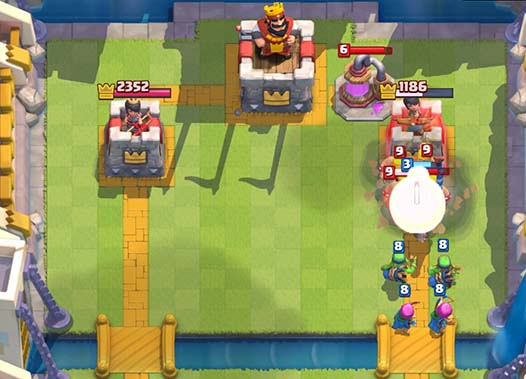 Even without Zap my push still ended up doing around 1200 damage which is a really nice result this early in the game. Following up your Hog or Prince push with both Spear Goblins and Archers is often a good idea. These small troops can do a ton of damage. 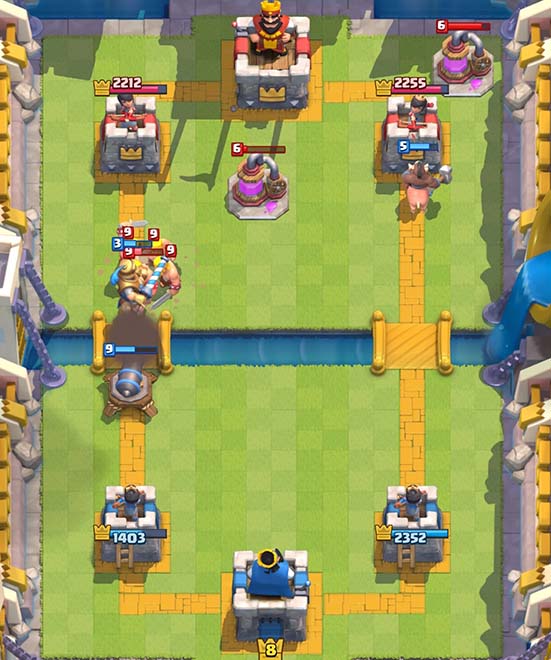 Here is an example of pushing both lanes at the same time. My opponent manages to stop my Prince in the left lane, but my Hog Rider got to the tower without facing any defenders. A Hog Rider alone on a tower will deal a lot of damage.

Very often I end up taking out one of the enemy towers early in the game. When that happens it is time to play more defensively and only push when you have good opportunities. Below I have posted a few examples on how to defend using this deck.

When your opponent sends the Pekka, Giant or Golem at you, you want your Cannon int he middle of the area in front of your King tower. You can then use smaller troops like Spear Goblin and Archers to deal a ton of damage to him while he slowly walks over there. Don’t place all your small troops at the same time or at the same spot, as your opponent might have Arrows, Fireball or Freeze ready to be played. 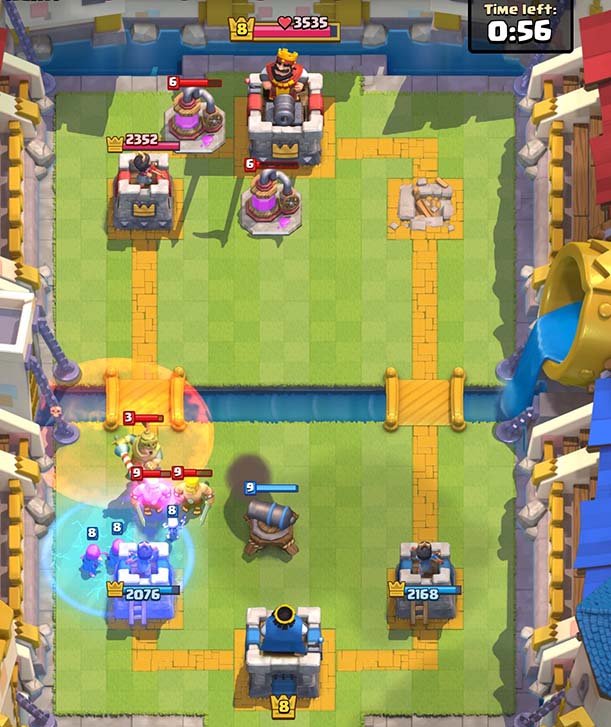 The Cannon works really well against other troops as well. The image above is from the same game as my first attack example. I have taken out my opponent’s tower early and I’m doing my best to hold back his attacks.

My Cannon, Archers and Spear Goblins are dealing with the Prince on the left side. I have Zap ready to deal with the incoming Minion Horde on the right side. 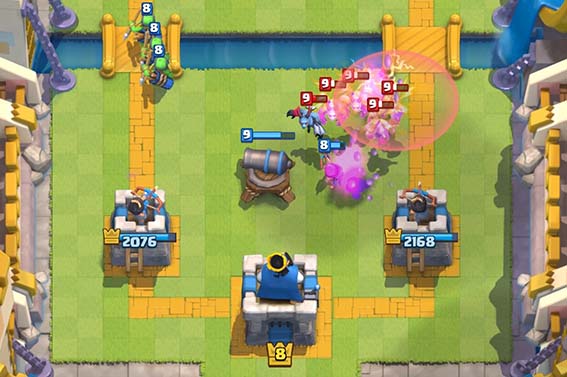 Zap together with help from some Archers easily takes care of the Minion Horde. The Archers were not necessary but I wanted to stop the Minion Hore from doing too much damage to my Cannon. 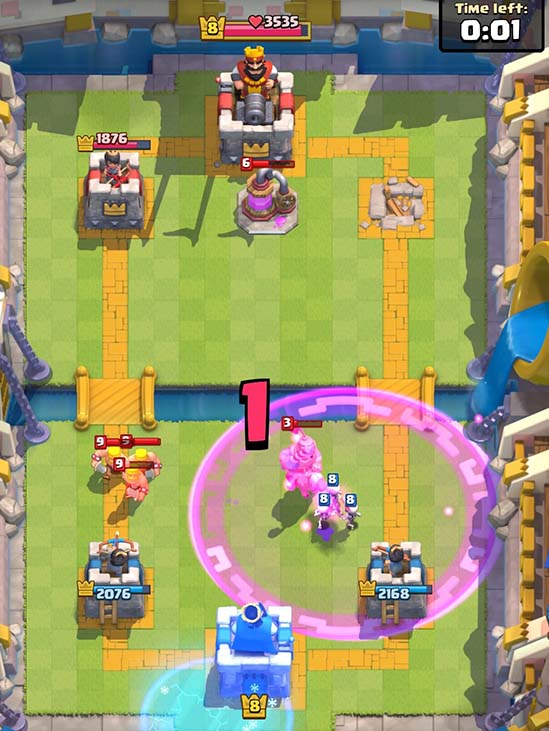 Skeletons are great at stopping an enemy Prince who is rushing towards your tower. An enraged Prince can do a ton of damage in no-time so it is really important to stop him. In the game above I successfully defended my towers and took down the victory. 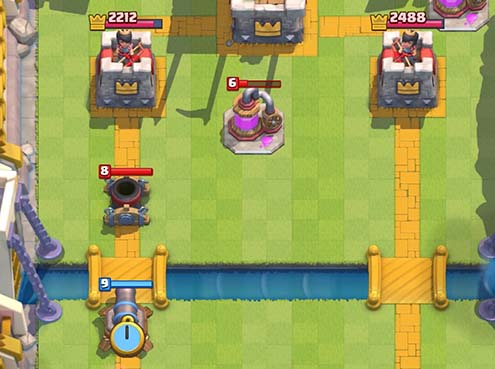 Here is how I often deal with the mortar. The cannon works really well at taking out the mortar quickly. It can also work well as a distraction while other troops take the mortar out.

The Prince can also be used for taking out enemy mortars that are shooting at your towers.

I am having an awesome time with this deck, and I am really looking forward to continue playing this deck now that I’m done with this post. I’d love to hear what you guys think about this deck. Maybe there are cards I can replace to make the deck even better?

I know the deck can be a bit challenging to play at first, but once you know how to play it, it works really well. Seeing both the enemy towers fall at the same time from your Prince and Hog Rider is really awesome. Have fun!