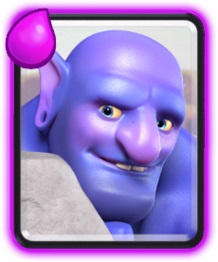 Most of you may have seen how the Bowler works and finds him amazing because of its unique attack that pushes back enemy troops. It’s a great to see another troop having new attack style in Clash Royale. You can create different combinations, attack styles and decks with the Bowler and have as much fun as you can.

The Bowler is an epic card that you can obtain in the newest Arena 8, Frozen Peak, along with Ice Spirit and Lumberjack. This big guy carries an enormous boulder, which rolls as he throws it to his opponents. As the boulder continues to roll, it will damage all enemies towards its path. The range of the attack is 5 tiles and damages nearby units.

The attack of the Bowler is strong enough to instantly kill low hp troops like skeletons, Goblins and spear Goblins. The projectile of the bowler is linear and damages everything on its path except flying troops. The range of the boulder is quite long and placing it properly can hit multiple troops and can even hit the Crown Tower at the same time. The attack of the Bowler is similar to The Log and pushes away troops except for cards with high hit points (Royal Giant, Giant, Golem). 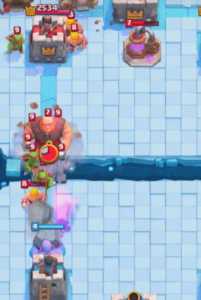 The Bowler also has a good number of hit points, higher than the Valkyrie but lower than the Royal Giant. Because of his good hp, he can deal sufficient damage to the enemy tower alone. He can’t be easily countered by Goblins, Archers and Spear Goblins because he can simply one shot them. However, remember that his attacks are slow and damages the enemy in a straight direction where he is attacking. He is an insane counter to spawner decks as he can easily negate every spawned troop. 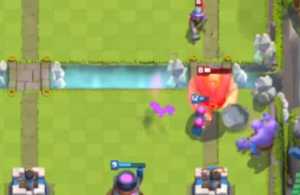 The strengths and weaknesses of the Bowler all lies in the placement. If you can effectively place the bowler where the linear damage of the boulder will pass through most enemies is important. Remember that the Bowler targets anything and if its first target is a tank and you placed the Bowler on the side not in front of the tank, the boulder will travel on the side, not being able to hit the rest of the troops behind. 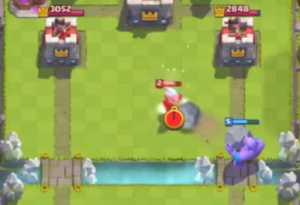 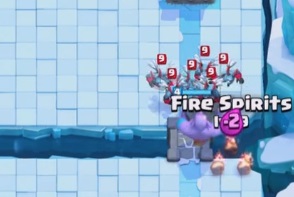 Another thing to remember is that your Bowler won’t attack flying units, making it very weak against Minions and Minion Horde. Build a good deck that can support the Bowler from its weaknesses and you can maximize the card’s effectiveness. Here’s some good cards that can team up with the Bowler:

The Giant is the best tank that you can use with the Bowler. The Giant has a cheap elixir cost compared to other tanks like Royale Giant and Golem. He can tank the Crown Tower’s attack while the Bowler will act as a support for the Giant against spawn troops. Your opponent will have a hard time killing two high health troops at the same time.

The Hog Rider works well with the Bowler, too. You simply put the Bowler behind and wait until it gets near the river. Then use the Hog Rider to go straight to the enemy crown tower.

Similar with the Hog Rider, use the Miner as a distraction to the enemy Crown Tower.

Always have an Arrows spell. The main weakness of the Bowler is its inability to damage flying units. Minions and Minion Hordes will be a bad match-up against your attacks so a quick Arrows against these Minoins can turn the tide to your favor. It even get you a good elixir trade.

Fire Spirits is a good choice to use as an addition to counter Minions and Minion Hordes. You can also use it offensively in a combination of solo attacks with the Hog Rider, Giant or Mini Pekka. It can also weaken Barbarians health. A good card with the Bowler because of its cheap elixir cost. 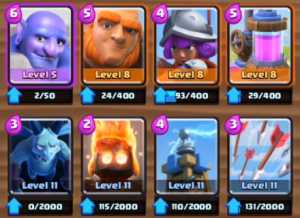