Just got the Witch card from one of your chests? This article explains how to get the most out of using this card in your decks. The witch summons skeletons, shoots destruct beams and has glowing pink eyes that unfortunately don’t shoot lasers. She is best used in arena 1 to arena 6.

The Witch card can be obtained as early in the Training Camp where you can start building your deck and win battles as you go to higher arenas. It is really a good card especially for beginners and can counter many cards from lower arena decks.

The strength of the Witch greatly relies on her skeletons. Her versatility is really an advantage in early arenas since you only have few cards to play with. She’s easy to use with combinations of different cards. She can be an offensive pusher with her skeleton and a defensive counter attack for tanks, flying units and multiple units. Her splash damage counters minions, skeleton army, low level Barbarians, goblins, etc. Her skeletons can counter tanks like giants, giant skeleton, etc. and strong fighters like the prince, mini pekka, pekka, and etc. 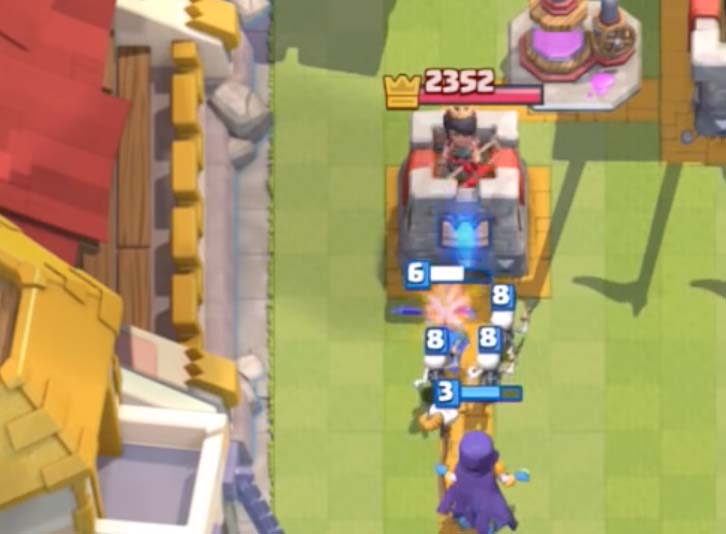 However in higher Arenas, this is where the Witch will slowly lose its shine whereas there are many cards can counter her especially with damaging cards like Lightning Spell and Rocket that can 1 hit her.  Even a high level  Fireball can turn her health down immediately. Another weakness of the witch are area/spash damaging units like Bomber, Wizard and Valkyrie, which kills her summoned skeleton quickly.

Guide in building decks with the Witch:

Let me know which Witch decks works for you! If you have other good combinations with the Witch, comment it below and share it with us!