As you all know by now SuperCell released a new update about a week ago with six new cards. I have been away on vacation and just got the chance to try out the new update this morning.

First I got crushed by the royal giants, lava hounds and Sparky, and got knocked down to 2600 trophies. The new update changes a lot of stuff with the game for sure. Now this evening I just climbed back to Legendary Arena after making some changes to my deck and figuring out how to counter the new cards.

In the coming days I will test out the new cards more and make changes to my deck guides. I will also write a guide on the deck I am currently using and explain how to counter the new cards. The deck I am using now is this: 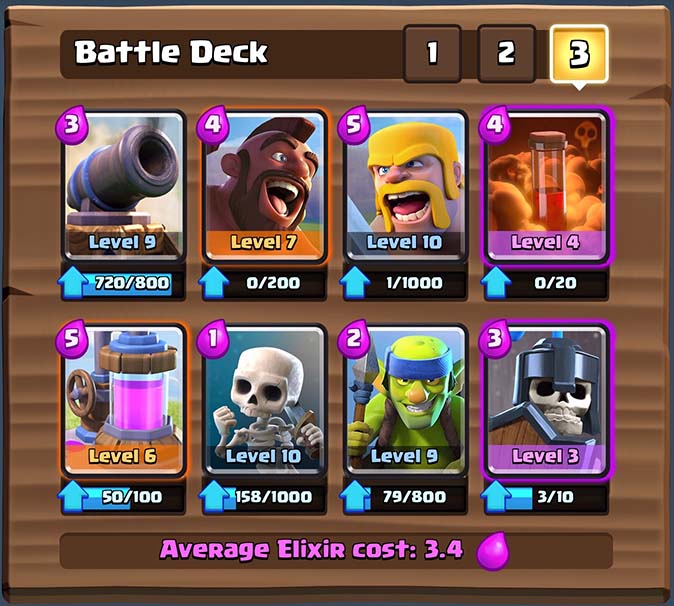 I guess my elixir pump spam deck is the closest one to this I have written about before. I really want to have the barbarians in there though to deal with the royal giants, and I want the skeletons and guards to deal with sparky. I tried it with freeze instead of the elixir pump, but that didn’t work as well.

I also got the fire spirits but I didn’t get them to work well in my deck. Out of the 50 or so games I have played today I have faced fire spirits 2 or 3 times, are any of you guys using them? I have faced lots of players with Sparky however, and I think that is the most challenging of the new troops to counter. I will write an article on how to do it soon, but basically you just want to let it shoot on some low cost troops or troops with shield first and then drop your high dps troops around it.

So what do you guys think of the new update? Any new cool decks I should take a look at? Really exiting to get back to the game with all these new troops!