Tournaments in Clash Royale has been the major update of the recent patch, having an alternative play for those who want to earn rewards and interact with other players. Because of the restrictions and level cap of the Tournaments, the deck you are using may not be the best when it comes to Tournament battles. Here’s a deck guide about the popular Trifecta deck and why it is the best used  in Tournament battles.

What is Trifecta Deck?

Trifecta deck originated from the original trifecta cards – Musketeer, Valkyrie and Hog Rider. They are called Trifecta because the three cards works well together. They are strong and almost unstoppable if executed correctly. Trifecta decks have surfaced since but has gotten a lot of attention lately because of the Tournament’s level cap limit.

Trifecta deck is one of those decks that doesn’t need to a have legendary card to be effective. Though, you can experiment on your own will if you want to try different combination or add your favorite cards in this deck. However, I mainly suggest to use this deck combination that works not only in tournaments but can be used even in low to high level arenas. 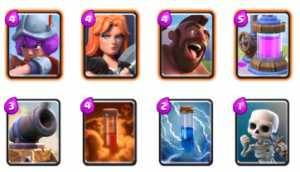 This Trifecta deck is the best combination that works among the rest. It doesn’t have high cost elixir cards and only consists of 1 Epic card, which is Poison. Additionally, some players prefer to use Ice Spirit in replacement of the Skeleton. Since both only cost 1 elixir, they can switch them up or choose which card suites your playstyle better.

Musketeer – is your main range troop that can counter opponent’s flying/air troops (Balloon, Lava Hound, Baby Dragon and etc). She got a strong damage and good range that can trade high damage from afar. Your opponents should be careful to let a Musketeer attack a defenseless tower because she does hit hard.

Valkyrie –  is one of the strongest card in defending and countering your opponent’s attack. Just place her near the squishes (low hp troop) and she’ll instantly kill them with a swing of her axe. She can destroy even mid hp troop like Wizard, Musketeer and even Barbarians. Having good hit points and splash attack, she’s a great troop to use for both defense and offense.

Hog Rider – your main tower-damaging troop. Because of his high health and good damage, at the cost of 4 elixir, he can deal a lot of damage to the enemy tower if not countered immediately. He’s really easy to deploy and does the job well in destroying buildings and towers.

Elixir Collector – your main advantage against your enemy is having more elixir keep pressuring your opponents. Cards from this deck have low elixir cost, giving you and advantage to keep placing units until you get that perfect trifecta combination working.

Cannon – best cost effective building to counter tower-aggressive troops like Hog Rider, Giant, Royal Giant and more. Using the Cannon to distract these troops are important in playing it with this deck.  It has a cheap cost of 3 elixir with good damage and decent hp despite its consecutive nerfs.

Poison – is a very strong spell because of the long duration of damage, ability to slow movement and attack speed with large area of effect. It counters a lot of cards like spawner cards (Goblin Hut, Barbarian Hut and etc), swarm troops (Minion Horde, Witch, and etc) and buildings. Since Poison slows the movement and attack speed of enemy troops, you can use it effectively to delay your opponent’s push.

Zap – a cheap spell that works wonder in Clash Royale. It offers a lot of strategic gameplay because of the spell’s usage. It can instantly kill low hp troops, stuns the enemy for delay, reset the enemy target’s line of sight and works effectively with the Valkyrie, Hog Rider and Poison.

Skeletons – your only swarm card which allows you to be effective in different scenarios.  Since they only cost 1 elixir, they are very cost efficient even with the reduced amount of skeleton from the recent update (from 4 to 3 skeletons). They can provide better damage to high hit point troops like Giant, Hog Rider and Royal Giant. Additionally, they are so good in distracting high damaging troops like Mini Pekka, Sparky, Pekka and etc.

Your first move should always be done after reaching the full elixir bar (10). Ideally, you should always put down the elixir collector at the start of the game if it is available. If not, you can either choose to put down your Musketeer at the behind your Kings Tower. 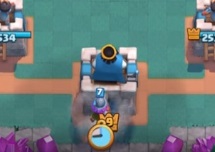 Whether your opponent will defend or attack the opposite direction, the Musketeer if left defenseless can deal good damage to the tower alone.

You can also switch up and change your playstyle so that your opponent’s won’t be seeing the same strategy over and over in the tournament. You can always use the famous Hog Rider attack to check your opponent’s cards and examine how well he plays his deck. 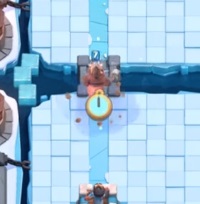 Your number one rule should be, never let a troop get pass you to target your tower. Always counter your opponent effectively by using your Cannons, Skeletons and Valkyrie to defend. 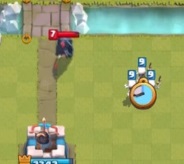 Skeletons effectively counters the Mini Pekka and gaining more elixir advantage to attack for the next turn. 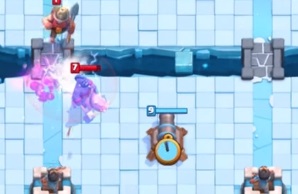 Proper placement of the Cannon to distract the Hog Rider so that your two towers will help kill the Hog Rider easily. You can use Zap additionally to wipe out low hit points troop like Goblins, Spear Goblins, Fire Spirits and etc. 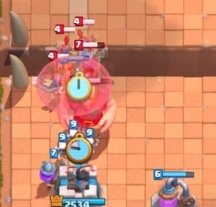 Remember to always place your Valkyrie behind the tank and near the low hp enemy troop so that your enemy won’t get that full effective push. You can take care of the Giant later by putting Skeletons to peel off his high hit points. You can also switch to Poison in cases where the Valkyrie is not available. 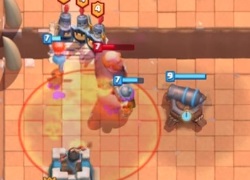 As the saying goes,”The best defense is a good offense“, it literally applies in Clash Royale especially with this deck. 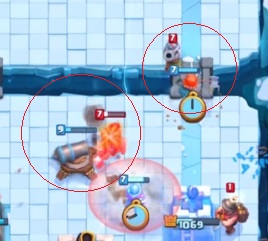 As you can see in the screenshot above how the Trifecta cards with the cannon effectively defend his towers by countering each offensive card the enemy place upon. Afterwards, you’ll just have to drop the Hog Rider with Poison and Zap. You can easily break opponent’s tower and destroy his gameplay if you can constantly counter every move he makes. 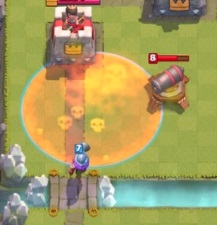 One weakness of the Trifecta deck is also about countering the Hog Rider by a defensive building. Don’t push yourself too hard to go for an offense if you find buildings in the center of the enemy map. The technique is to use your Musketeer and wait until your opponent lands another card. That way you will now use the Poison spell to get the most out it, damaging the tower, building and the troops. You don’t always have to go full offense, if you’re opponent is too defensive, a good Poison will do the trick.

The Trifecta deck is really an outstanding deck knowing that it doesn’t need a lot of epic cards or legendaries to be effective. You can easily build them out and increase their level early on. At Arena 5, where your deck is complete, you can stick with this deck and win your trophies all the way to the top.

Once you reach level 8, you can now join Tournament battles and win your rewards. Always remember to at least reach the level cap for your troops to have an even advantage in winning the battle.

Trust your cards, don’t be afraid to take risks and most importantly, have fun playing! 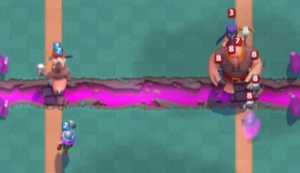