“Drags enemy troops to the center of the Tornado while dealing damage over time. Doesn’t affect buildings.” 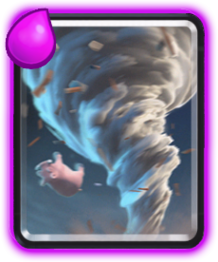 Tornado spell is an epic card that costs 3 elixirs and can be obtained in Arena 6, Builder’s Workshop. It is the first card that was released in the four new cards for the November patch. It’s a spell that pulls and damages troops toward the center for the duration (3 seconds). However, the spell only works for troops and does not affect buildings/towers.

The Tornado spell can be used in different situations. It offers great utility to destroy your opponent’s play and counter enemies. Listed below are some of the most important usage of the Tornado spell.

#1 It can counter low health troops

Goblins, Spear Goblins, Minions, Minion Hordes, Skeleton Army and more. All of these squishy swarm troops can be killed by the Tornado before they reach the tower.

Like Witch, Musketeer, Mega Minion, Wizard and other middle hit point troops, you can counter them by placing the Tornado behind them, close to the bridge. Place it where the troop won’t be in range to attack your tower. On the other hand, your tower should be in range to damage the target while being pulled. This requires skill and timing. If you placed it closer or farther, your tower may not be able to damage the target for the full duration.

This is the best card to counter the Miner because you can pull it to change target and attack the King’s Tower. This is very crucial especially if your King’s Tower is activated early in the game. It gives you additional defense and giving you more opportunity to have an aggressive game play.

#4 Pulls tanks away from the other lane

With a building card, you can separate the tank (Giant, Golem, Lava Hound and etc) from its support troop by using the Tornado and pulling the tank near the building you placed. Ideally, the building should be at the far center of the opposite lane where the tank is. Next, pull the tank towards the center where it will target the building you placed in the opposite lane. By doing this, two towers will now attack the tank and you can focus on targeting the supportive troops, behind the giant, so you won’t take much damage to your towers.

It’s also a good counter to Lava Hound. Aside from pulling it to target the building on the other lane, you can also use the Tornado to pull the Lava Pups towards the center so that the other tower will also damage the Lava Pups.

Because of its ability to pull troops towards the center, splash damaging troops like Wizard, Witch can deal so much damage with a single strike. Not to mention the Princess, Sparky and even Fire Spirits can take down strong pushes with the use of Tornado!

Comparison to other spells

vs Zap – the Tornado and Zap have almost the same damage in tournament cap level, a level 9 Zap deals 169 and Tornado at level 4 deals 174 damage. The Tornado won’t be able to reset the attacks but it can pull the troops for it to be out of range and switch targets.

vs Arrows – the Arrows deals more damage than the Tornado. With the same elixir cost, Arrows can kill the Princess and one shot Minion Hordes, without relying on towers. However, the Arrows lacks utility. The Tornado can do a lot of tricks and lethal combination for competitive play.

vs The Log – The Log has proven to be one of the best spells in the game because of how effective top players use this card in their battles. Comparing it with the Tornado, the Log is harder to obtain because of its rarity as a legendary card. Additionally, the Tornado can affect flying troops compared to The Log which only damages ground units. The main advantage of the Log against the Tornado is that it can one shot the Princess while also getting an elixir advantage.

Combining the Tornado with others spell will create a good combo against a pushing lane. All troops inside the affected area will be pulled towards the center where you can cast Fireball easily and destroy Barbarians, Witch, Musketeers and other troops with lesser hit points.

You can also use this combination if you’re pushing to the enemy tower.If your enemy is defending, you can use the Tornado to pull the troops in the center of the opponent’s tower and use Fireball, Zap and other spells.

Ex. You deployed a giant and your opponent used Minion Horde. Use Tornado to pull the Minion Horde away from the Giant and Zap it together with the tower. Another scenario is when a Witch or Musketeer is used by the enemy to defend. Suck them together by using the Tornado and use Fireball. Lastly, Three Musketeers are often placed at the back of the King’s Tower, you can use the Tornado to bring them back together and Fireball when they’re near the tower without damaging the King’s Tower.

Splash ranged troops are the Tornado’s best friend. A Princess and a Tornado can be an annoying combination because both have cheap elixir cost and can counter/out range low health troops. If your opponent doesn’t have The Log/Arrows in their deck, it will be a hard for them to counter a well placed Princess.

Sparky combination with the Tornado is also deadly. Since the Sparky takes a time to charge its fatal attack, the Tornado will give the Sparky enough time to charge and decimate troops that are sucked in the Tornado. Combined with other supports like Wizard/Princess, it will be difficult to handle if you don’t have spells like Zap/The Log to counter Sparky and Princess.

Fire Spirits do enormous damage at a cheap cost. Level 9 Fire Spirits can do 507 splash damage if all three of them hit their targets. With the use of Tornado, Fire Spirits will deal a lot of damage to every unit that are pulled together towards the center.

You can also use the Furnace as an alternative building/Fire Spirit combination. However, it only deploys two Fire Spirits at a time because it’s a strong building for both offensive and defensive play.

This deck focuses on the Sparky/Princess combo. With the use of Tornado spell, you can easily pull enemy troops where the Sparky can hit them all. The Princess will take care of the surviving troops. The Lumberjack will serve as a tank/support for this deck. A good placement of the Lumberjack will give the Sparky the Rage needed to recharge and attack faster.

If you don’t have Lumberjack or Princess, you can use the Wizard and Elite Barbarians for replacement.

This is more of an offensive deck which focuses on targeting the tower and the deployed troop with the Rocket. You’ll also use the Miner and Mega Minion for offense and Princess and Tornado for defense.

Another Princess/Furnace/The Log combination with the Tornado. It is extremely annoying when facing these cards because it will destroy your game plan in pushing one side of the lane. The Tornado and The Log will prevent you to build a strong offensive push.

The Tornado is indeed a strong spell in the hands of the right player. However, I find it difficult to use the Tornado in daily matches. Since the Tornado is an epic card, its harder to level it up compared to other spells. You can’t request them in your clan so it will take some time before it will become strong enough. Also, most of its best combinations are with the legendary cards.

It is very recommended to use the Tornado if it’s level 4 or higher. If not, it’s better to stick to other high level spells that you have instead because the damage you’ll do won’t be all worth it for a 3 elixir spell. The main benefit that you can have is the pull effect.

Here are some videos from Orange Juice Gaming, Clash Royale Youtuber. In the videos, you can see how the Tornado spell can be used in different situations.