Welcome to Legendary Arena! Here’s a guide for all the arena 10 players out there who are struggling or those who wish to reach Clash Royale’s premier arena.

It’s not easy to get to this level, but once you are here – consider yourself an Elite Clasher!

In this guide we will teach you how to Reach Legendary Arena, How to Play to Win, as well as some rare, but very effective Tips to improve your Arena 10 gameplay and win. You will even find good deck examples for Legendary Arena! 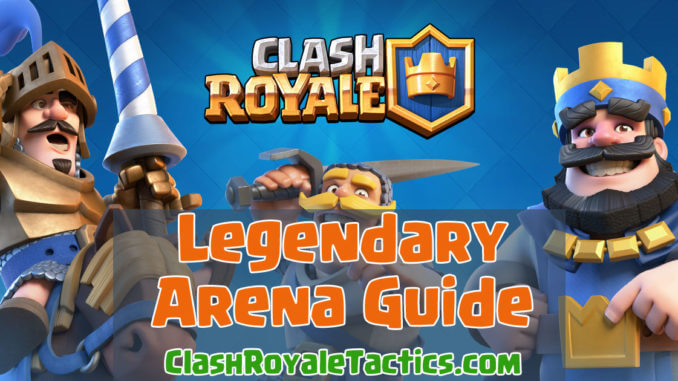 How to Play Legendary Arena and Win:

How to Reach Legendary Arena Fast:

Read my full guide on how to reach Legendary Arena for even more tips (some not covered here).

Additional Tips for Winning on Arena 10

Watch TV Royale and consult online resources and guides such as this one. One particular resource I recommend is Clyde’s tier list. It’s a personal ranking of all the cards in the game by one of the best Clash Royale players out there.

Another is the Clash Royale Reddit; it may not be the best strategic forum, but it provides an opportunity to talk with other players such as yourself.For YouTube, I highly recommend Orange Juice. He is the premier strategy YouTuber on Clash Royale, and millions have learned from his excellent strategy.

Firs – check out my guide for Top 7 Cards for 2017, so you can build an even better deck yourself!

Legendary arena is a new experience for many players, and it is where the top players are. If you’ve made it, congratulations! Have fun and try to learn from every battle. Who knows? Maybe you’ll be at the top of the leaderboard someday.